My Little Addiction ~ with Linky

The first step is acceptance.  So, here it goes.

I share this addiction with many people out there.  I just can't help it.  There are so many amazing DIY tutorials, recipes, fashion and stuff - in picture form!  I could spend hours just looking at all of the amazing pictures and website they lead me to.  In fact, before and while I was pregnant, I DID spend hours at a time on Pinterest (when I wasn't nesting).  Even when my daughter was a newborn, I would spend my late-night-nursing-sessions at the dining room table on the laptop while my teeny tiny baby ate.  I now barely have time to brush my teeth, let alone go on the computer while my daughter is awake.  So most of my Pinterest'ing is done while she is sleeping.

I have always been a visual learner, so pictures are important to me.  When I discovered Pinterest I was in heaven.  I can skim through 100 pictures in a minute, find something that catches my eye and go to that website (as long as it was pinned properly).  If you go to my Pinterest Page you will see that I have a LOT of pins.  They range from food to future house plans to specific holidays to (my favourite) crafts.  My Things to Make board is getting a little out of hand since I have only accomplished a few of these projects.  Instead of pinning more stuff, I really need to organize the rest of my boards and actually accomplish some of the things I've pinned.

These are my completed projects so far:

Plant stands made from old magazines 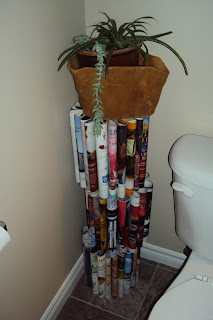 Each layer is 4 magazines.  I offset them so that it would be sturdier.  I put it beside the toilet in the bathroom because we have an unusually large space in between the toilet and wall and it just needed something there. 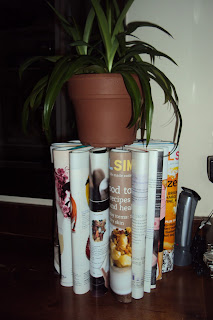 This one is on the bathroom counter and hides my husband's beard trimmer in the corner. 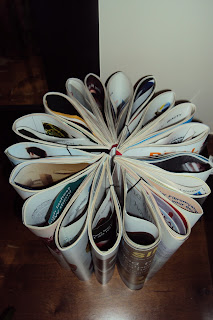 This is the top view.  Since this is 4 separate magazines, I decided to hold them together with bobby pins.  If I ever need to move it I have to take it apart anyways because the bobby pins are not a permanent fixture, but it keeps them from shifting too much if they get bumped (especially good for the tall one beside the toilet).  I used this video to help me figure out exactly how to do it.  If you search "DIY magazine plant stand/table" or "recycled magazine plant stand/table" you will find lots of pictures of these stands and written directions on Google.  Like I said earlier, I am a visual learner so I understood it much faster by watching someone make one.  Some of the tutorials say you don't have to use glue, but I found the pages slipped out from each other if you don't use glue.


Another completed project was a rag rug I knit with t-shirt yarn I made using this picture tutorial. 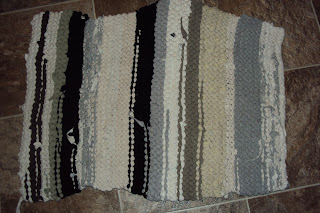 It is super wonky because I used t-shirts of varying fabrics.  Some stretched far more than I wanted to and a couple (the white and grey parts that are the widest in the middle) barely stretched at all.  I'm okay with it being wonky, it just let's people know that it is home made.

My most recent project was not at all inspired by anything I found on the web.  I bought these metal garden mushrooms a couple years ago at the dollar store and left them out over winter so they got super rusty and a couple of them broke.  So I decided to jazz them up a bit before putting them back in the garden. 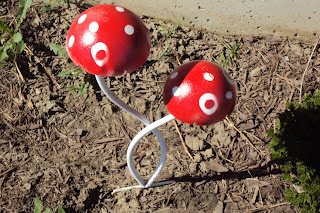 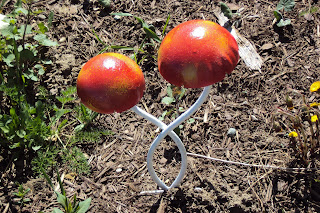 So, there you go.  Evidence of my little addiction.  An addiction that I have no desire to do a 12-step program for.  Just look at the results - who would want to get rid of that kind of addiction?  Certainly not me.

Hi! I'm Robin and these are my adventures.